I debated whether or not I should post some pictures of TJ’s skin when he was having reaction.   While I do want to keep the positive spin on all of this, I also want to show what different types of reactions can look like.  Of course, they are all different from person to person.   In addition, they were often different from trigger to trigger.  Before October, we never saw any of this.   Then, in October, “random” (or so we though) occurrences began… 1) First hives ever! We were terrified and called the pediatrician.   They went away after Benadryl. This was in October before we knew of any food allergies.  While TJ only gets a random hive or two here and there if off of Zyrtec, nothing like this picture, hives still terrify me.

2) In November and December, TJ would sometimes start the morning off with this type of red rash on his face.   This was once again before we knew about food allergies and it would last about an hour until it faded with no medication. Looking back at this, I believe it occurred on mornings after I ate something like pizza (with cheese) for dinner. 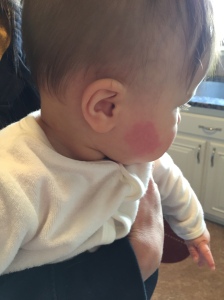 3) These two pictures were sent were from daycare in April and May.   Since all of the allergens were eliminated from his diet and my diet at this time, it is difficult to pinpoint a cause.  Both times, I rushed to see if he was okay and he was there smiling.   The redness disappeared after about an hour again.   We believe it was a contact reaction of some sort to either something environmental or food. 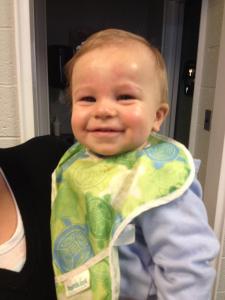 However, like usual, TJ doesn’t fret much and instead smiles his way through life, an important lesson he has taught me…just have faith Mommy and smile on…

Follow The Art of a Messy House on WordPress.com